The Story of Mark Rosenzweig, Founder of SharkNinja (General)

ss experience. He is a third-generation businessman who has inborn tinker abilities. He is an exceptional innovator, creator, inventor, and entrepreneur. Mark graduated from the University of Pennsylvania in 1991 with a Bachelor of Arts and Psychology. In the same year, he also graduated from the Wharton School with a Bachelor of Science in Economics. After Graduation, Mike relocated to Los Angeles, where he worked in the entertainment industry. Some of the companies he worked for include Sony International Television and UTA. Mark went back home in 1994 and joined his family in Jolson Group, a sewing business. He was the sales manager of the company. Mark's grandfather and grandmother, Benjamin and Miriam Jolson, founded the company in Montreal in 1954. Mark's grandparents used a Canadian dealer network to sell the domestic sewing machines. Mark's parents expanded the business company in the late 1970s to include industrial sewing machines whose primary target market was the Canadian apparel manufacturing industry. Mark is passionate about innovating small appliances and is always on the lookout for opportunities to create his entrepreneurial ventures. He looked forward to manufacturing and selling products across Canada and the US under his new brand name for which he can control and build loyalty. While at home, he did not stop tinkering with appliances and inventing revolutionary appliances. He designed the appliances to replace similar cheap sweeper and steamers that had not changed significantly from the time of their invention. He specifically wanted to disinfect using cleaning steam rather than using toxic chemicals. He thought of safe and appropriate cleaning and safety of children while playing on the kitchen floor. This desire pushed him to come up with effective and long-lasting revolutionary solutions. He later founded Euro-Pro, a company that aimed at creating innovative and exciting products with the help of his parents, Max and Aviva. Consumers love and talk about Markâ€™s products. The first products that Mark produced were sold under the Euro-Pro brand and had a domestic ironing system from Italy. Soon after, Mark started using steam pressers, domestic sewing machines, and food processors. The company registered sales of almost $1 million in the first fiscal year. Euro-Pro North America has undergone expansion to include vacuum cleaners sold under the "Shark brand" and hidden kitchen appliances that use high performing blending blades sold under the Euro-Pro and Bravetti brands. The influential infomercial strategy innovated by Mark made the products produced by Euro-Pro to attract a broad audience and acceptance. The company sold high-quality products to retail partners. They also appeared on national television infomercial as well as shopping networks with Mark as the host telling the story of the brand and product. Sales went up to $100 million and then $250 million in fiscal 2000 and 2003 respectively. Mark's brother, Stanley Rosenzweig, joined him at Euro-Pro intending to help Mark relocate the business to Boston from Montreal. Stanley also assisted in restructuring and bringing the company to the next level of success. At the time, Stanly had an MBA in which he acquired Harvard in 1991 and had significant experience with large multinational companies that marketed and produced small appliance under proprietary names. Passion often drives inventors and entrepreneurs, and most would probably do it for free or as a hobby if they do not take it as a profession. The passion for creating drives Mark Rosezwign which pushed him to come up with ideas that led to the development of viable products and innovations patented since 2003. The innovative filter sensor and vacuum cleaners were patent 7303613, while basket for deep fryer and method to cook food products was patent 7500427, and compact cyclonic bagless vacuum clear was patent 7341611. Between 2003 and 2007, Mark independently and sometimes as part of a creative team patented several inventions between 2003 and 2017. With the help of his father, Max developed the line of Shark steam mops that used a "no loss suction" vacuum technology in 2007. The innovation resulted in a rise in Ero-pro's sales to over $400 million by the end of the fiscal year 2009. Mark Barracas, a good friend and new partner, joined Euro-Pro as President in the 2009 fiscal year. Mark Marrocas is a successful veteran executive at private equity-backed companies. Together, Mark and his new partner focused on innovative product development and high-quality manufacturing process. The two added more products to Ninja kitchen appliances and produced a full line of vacuum cleaners. Eventually, the company reached a gross sales of over $0.5 billion and $1 billion in the fiscal year 2010 and 2013, respectively. SharkNinja had over 1000 employees, more robotic vacuums, and heated ninja appliance, and attain $2 billion in sales by the end of 2017. Mark has a passion for philanthropy and often supports various philanthropic organizations outside his professional work. He has a specific interest in helping in medical research in different health institutions, including Brigham and Women's Hospital, Mass General Hospital, and the American Heart Association. Mike also engages in other physical activities such as biking, tennis, and skiing. Currently, he resides in Boston area and loves spending time with his family. 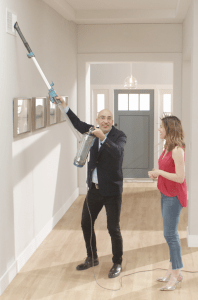