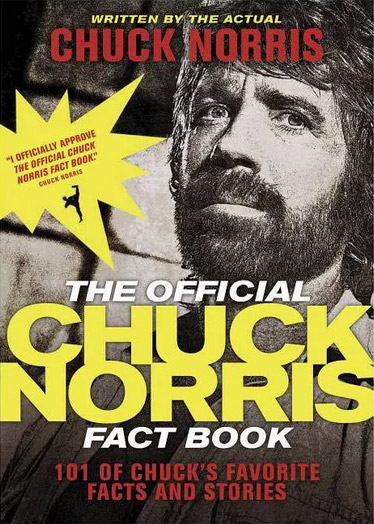 101 of Chuck's Favorite Facts and Stories

Hundreds of thousands of humorous Chuck Norris facts have been published, traveled around the globe via the Internet, and gained an international audience of millions. Chuck Norris facts are a quirky, extremely popular Internet phenomenon that has entertained fans from all over the globe. In the last several years, Chuck Norris has been asked repeatedly from the heartland of America to the battlefields of Iraq and Afghanistan, "Which facts are your favorites?" For the first time ever, in The Official Chuck Norris Fact Book, Chuck gives readers not only his favorite "facts", roundhouse-kicked by the man himself, but also the stories behind the facts and the code by which Chuck lives his life. Fans from every corner of the globe will enjoy both the fanciful and inspirational from one of the world’s great action heroes. This book makes a perfect gift.

"Chuck Norris was bitten by a cobra, and after five days of excruciating pain ... the cobra died."

I was filming an episode of Walker, Texas Ranger out in the woods. The scene was with me and a Native American actor-friend, and we were competing to see who could catch the largest rattlesnake with his bare hands. The snake wranglers had two very large rattlesnakes, supposedly de-venomed. My friend didn't want to be filmed trying to grab the rattlesnake with his hand. So he said, "De-venomed or not, I'm not about to try it." I replied, "Why don't you just walk in from the woods holding the snake in your hand? I'm going to win anyway, because I'm grabbing the largest snake?" The larger of the two rattlers was slithering on the ground, so I sneaked up from behind and grabbed it by the back of the neck, picking it up and counting the number of rattles it had.

The take went very well, but the director wanted a second take. So the snake wrangler took the snake from me and put it back on the ground. I sneaked up to grab him a second time, but just as my hand grabbed his neck, he turned and bit me on the hand! As blood started gushing out, the director panicked and took off running.

I asked the snake wrangler if he thought I should go to the hospital to see if the snake had injected venom into me. He said, "That wouldn't be a bad idea." I told the crew that we had only one take, because I had to go to the hospital and the director was missing in action! (Then I asked, "Would someone please go find him?")

There was a happy ending to it all: The single take was good, I had no venom in me, and they found the director.

Later, I played back the snakebite scene on film and slowed it down frame by frame. Twenty-four frames equal one second, and the snakebite covered three frames. In other words, that snake bit me in one-eighth of a second. Talk about fast!

Chuck Norris is a TV and film actor who has starred in more than twenty films and is well known for his popular television series "Walker, Texas Ranger". He is also a martial arts expert and a bestselling author of numerous books including "Black Belt Patriotism" and "The Secret Power Within".