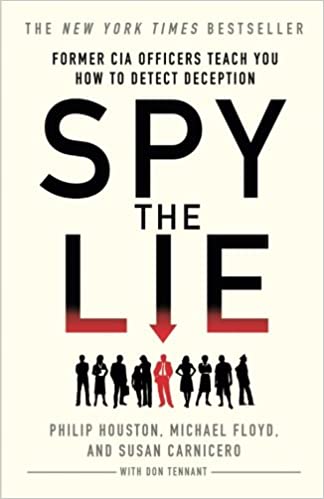 Former CIA Officers Teach You How to Detect Deception

About Spy the Lie

Imagine how different your life would be if you could tell whether someone was lying or telling you the truth. Be it hiring a new employee, investing in a financial interest, speaking with your child about drugs, confronting your significant other about suspected infidelity, or even dating someone new, having the ability to unmask a lie can have far-reaching and even life-altering consequences.

As former CIA officers, Philip Houston, Michael Floyd, and Susan Carnicero are among the world's best at recognizing deceptive behavior. Spy the Lie chronicles the captivating story of how they used a methodology Houston developed to detect deception in the counterterrorism and criminal investigation realms, and shows how these techniques can be applied in our daily lives.

Through fascinating anecdotes from their intelligence careers, the authors teach readers how to recognize deceptive behaviors, both verbal and nonverbal, that we all tend to display when we respond to questions untruthfully. For the first time, they share with the general public their methodology and their secrets to the art of asking questions that elicit the truth.

Spy the Lie is a game-changer. You may never read another book that has a more dramatic impact on your career, your relationships, or your future.

Phil is a nationally recognized authority on deception-detection, critical interviewing, and elicitation. His twenty-five-year career with the Central Intelligence Agency was recognized with the award of the Career Intelligence Medal, and was highlighted by his service as a senior member of the Office of Security. In that capacity he conducted thousands of interviews and interrogations for the CIA and other federal agencies, both as an investigator and as a polygraph examiner. He is credited with developing a detection of deception methodology currently employed throughout the U.S. intelligence and federal law enforcement communities.