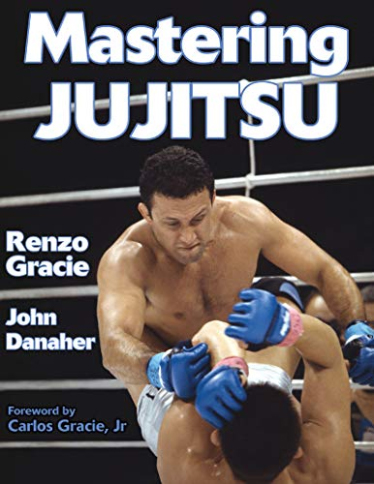 In recent years, the grappling arts have proven to be the most effective form of combat in mixed martial arts (MMA) and no-holds-barred (NHB) competitions. Above all others, the Gracie brand of Brazilian jujitsu has become recognized as the preeminent fighting style in unarmed combat. Now Renzo Gracie—instructor; competitor; and champion of numerous grappling, MMA, and NHB events—reveals the inner workings of the art in his latest book, Mastering Jujitsu.

From the origins of the art to personal techniques, you will experience the impact the Gracies have had on jujitsu and learn the strategies they have developed to dominate their opponents. Gracie shares the subtleties of the techniques necessary for mastering the art, and he clearly demonstrates the flow of movement with more than 250 high-quality photos.

Not only will Mastering Jujitsu help you progress from isolated skill development techniques to a full set of tactics and fight plans, but it will also introduce you to the concept of combat phases and teach you to attack from any phase. You will learn how to react to your opponent in any situation. Whether you're caught in a bottom position or attacking from the top, Gracie reveals the key strategies designed to give you the upper hand.

The depth and breadth of topics covered in Mastering Jujitsu will aid even the most experienced black belts in their understanding and execution of Brazilian jujitsu. With detailed coverage on advanced principles, you will get all the tactics, strategies, techniques, and drills you need for close combat fighting.

We have seen already that Maeda offered to teach jujitsu to Carlos Gracie. Maeda had created a martial arts academy where he taught what he called "jujitsu." It appears that the content of his teaching was largely a mix of classical Japanese jujitsu, kodokan judo, and his own strategy and methods of fighting that he had developed over his years of fighting. Carlos Gracie enrolled and became a student. It is unclear how long he trained under Maeda, but current estimates put it at no more than four years and probably somewhat less than this. In addition, Maeda was often traveling around Brazil at this time. It would seem, then, that a good deal of Carlos's training would have been under Maeda's top students, who often took on teaching responsibilities in Maeda's absence. What is clear from the historical record is that by the early to middle 1920s, Maeda had moved on to immerse himself in the Japanese colonization project.

In 1925, Carlos opened his own jujitsu school. He had begun training his brothers, and together they began teaching jujitsu based on Maeda's technique. It is interesting to note that Carlos was only in his early 20s when he opened his school, and he had trained for only about four years—it was a situation similar to Jigoro Kano's. As a student of Maeda, Carlos had learned the crucial underpinnings of the art that would become famous as Brazilian jiu jitsu.

(A quick note on spelling: Jujitsu and jujutsu are both considered the correct renditions of the Japanese characters. However, when jujitsu first came to the West, it was given a variety of [mistaken] spellings, as people grappled with the problem of translation and adequate representation of the Japanese language. The most common early representation of jujitsu was jiu jitsu. Since the Gracies began jujitsu training at a time when jiu jitsu was the most common spelling of the term, they naturally wrote down their art as jiu jitsu. Since then, most people have switched to the more correct jujitsu or jujutsu. Having created a tradition, the Brazilians have stuck with the old style jiu jitsu—hence, the spelling used in this book when referencing the Brazilian style.)

Renzo Gracie, born March 11, 1967, is a Brazilian mixed martial artist and Brazilian Jiu-Jitsu practitioner. A member of the Gracie family of Brazil, Renzo is the son of Robson Gracie, grandson of Carlos Gracie, nephew of Carlos Gracie, Jr. grandnephew of Helio Gracie, and the first cousin once removed of Royce Gracie. In mixed martial arts, Renzo has competed in the Ultimate Fighting Championship, Pride Fighting Championships, K-1, RINGS, and International Fight League.