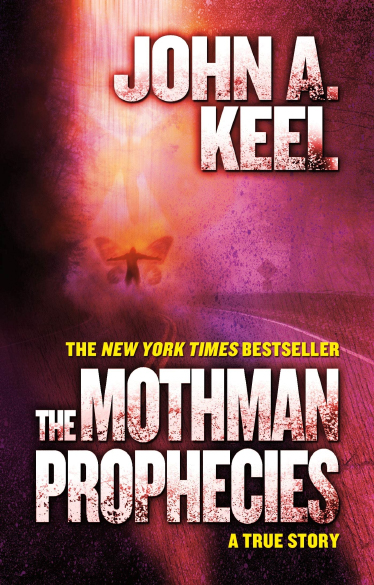 By John A. Keel

About The Mothman Prophecies

Translated into over thirteen languages, John Keel's The Mothman Prophecies is an unsettling true story of the paranormal that has long been regarded as a classic in the literature of the unexplained.

West Virginia, 1966. For thirteen months the town of Point Pleasant is gripped by a real-life nightmare culminating in a tragedy that makes headlines around the world. Strange occurrences and sightings, including a bizarre winged apparition that becomes known as the Mothman, trouble this ordinary American community. Mysterious lights are seen moving across the sky. Domestic animals are found slaughtered and mutilated. And journalist John Keel, arriving to investigate the freakish events, soon finds himself an integral part of an eerie and unfathomable mystery.

The Mothman Prophecies is the basis of the 2002 film starring Richard Gere.

Mount Misery is a heavily wooded hill with a few narrow dirt roads slicing through it and a number of large mansions set back among the trees. The late Henry Stimson, secretary of war during World War II, maintained a lavish estate on the summit. For decades the Mount was known as a haunted place, the site of a number of mysterious deaths and disappearances. In the spring of 1967 young couples necking on the back roads began to see low-flying UFOs, particularly around a field that was used as a junkyard for old cars. Others claimed to see a giant hairy monster with gleaming red eyes.

After Miss Paro began to broadcast reports of what was happening on Mount Misery, the usual mobs started to cruise the area nightly to the consternation of the scattered and snobbish residents. Jane and her boyfriend Richard joined the stream of cars one night in early May and eventually found themselves alone on a back road near High Hold, the old Stimson place.

Richard, who was driving, suddenly complained of feeling unwell. He stopped the car and a moment later slumped over the wheel unconscious. Jane was terrified. But before she could focus her attention on him, a brilliant beam of light shot out of the woods next to the road "like a floodlight." It dazzled her and she fell back in her seat unable to move.

The next thing they knew, they were driving along Old Country Road at the base of Mount Misery. "How did we get here?" Richard asked her, baffled. "What happened?"

"Let's go home," Jane choked. They never discussed the incident again until I arrived on the scene.

About John A. Keel

John A. Keel wrote his first article on unidentified flying objects in 1945, but it was not until a visit to the Aswan Dam in Upper Egypt in 1954 that he saw his first genuine flying saucer. He has written for numerous national publications, and his bylined newspaper features, syndicated by the North American Newspaper Alliance, have appeared in more than 150 major newspapers in the United States and abroad. His many articles on UFOs and his personal research on the subject resulted in his being awarded a plaque as "Ufologist of the Year" at the 1967 Convention of Scientific Ufologists.